Hybrid private-public cloud models are the reality in most enterprises in the forseeable future. Developers and business units coninuously go “rogue” and use public cloud services, while IT struggles with maintaining compliance and control and managing legacy apps in the traditional data center.

I’ve spoken many times about this constant push and pull between flexibility and control in the cloud. And it is becoming apparent that we need a better way.

Well, today, my friends at Ravello Systems announced that they have launched in public beta their Cloud Application Hypervisor and that they have received $26 million in funding from Sequoia, Norwest Venture Partners and Bessemer.

I’ve had the pleasure of working with the Ravello team in preperation for this launch, and I believe they have a much needed solution — built on a very unique technology — for many of the biggest problems associated with cloud deployment.

What is a Cloud Application Hypervisor?

The best way to think about Ravello’s technology is using the familiar hypervisor as an analogy. But while the traditional hypervisor holds a single virtual machine in it, Ravello’s CAH holds a complex multi-VM app in it. This allows you to encapsulate a complete application (load balancers, app servers, web servers, databases, etc.) AND it’s environment (networking, storage, etc.). The result is complete portability across clouds and between on-premise and public clouds. For example, you could take an existing VMWare-based application running on your data center and deploy it on AWS, Rackspace Cloud or HP Cloud as-is.

Development and Testing in the Cloud

So what is this good for? One of the first use cases Ravello Systems is targeting is the need to do development and testing in the cloud, while running the app in production in the on-premise enterprise data center.

The cloud — with its unlimited resources and ability to spin up machines quickly and then dispose of them — is ideal for testing and development. But as mentioned earlier, enterprise IT departments still have many issues with running production apps in the cloud. These issues include compliance, security, cost and fear of vendor lock-in and dependence. With Ravello, developers can deploy the application “capsule” in a public cloud, run multiple instances of it for parallel testing, collaborate on development and generally enjoy the flexibility of the public cloud.

When it’s time to move the app into production, IT can simply deploy the encapsulated app in the data center.

In the future, Ravello will address additional use cases such as more general cloud portability, cloudbursting and other scenarios.

It’s important to note that Ravello is delivered as a cloud service itself. You create an account, log in and can then create blueprints of applications (or use pre-existing ones) which can be cloned and shared. 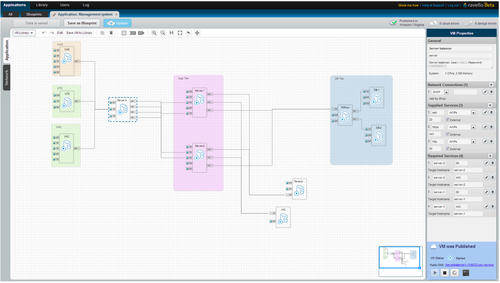 The leadership team at Ravello brings a lot of credibility to the table. Among them, Benny Schnaider, Rami Tamir and Navin Thadani, were the team that created the standard Linux hypervisor, KVM. They sold the company they created to commercialize it, Qumranet, in 2008 to Red Hat.

Check it out and let me know what you think in the comments.